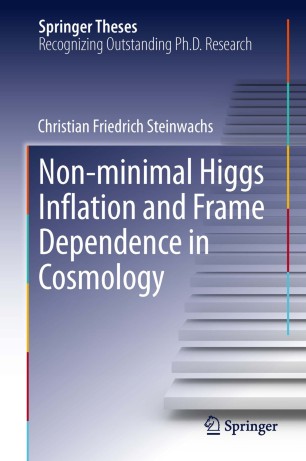 This thesis explores the idea that the Higgs boson of the Standard Model and the cosmological inflaton are just two manifestations of one and the same scalar field - the Higgs-inflaton. By this unification two energy scales that are separated by many orders of magnitude are connected, thereby building a bridge between particle physics and cosmology. An essential ingredient for making this model consistent with observational data is a strong non-minimal coupling to gravity. Predictions for the value of the Higgs mass as well as for cosmological parameters are derived, and can be tested by future experiments. The results become especially exciting in the light of the recently announced discovery of the Higgs boson.
The model of non-minimal Higgs inflation is also used in a quantum cosmological context to predict initial conditions for inflation. These results can in turn be tested by the detection of primordial gravitational waves.
The presentation includes all introductory material about cosmology and the Standard Model that is essential for the further understanding. It also provides an introduction to the mathematical methods used to calculate the effective action by heat kernel methods.