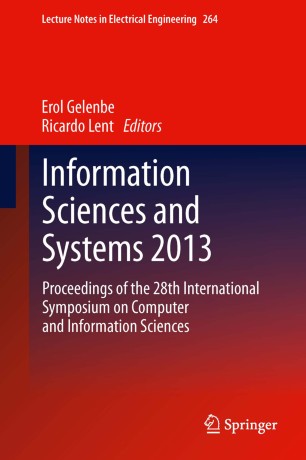 Proceedings of the 28th International Symposium on Computer and Information Sciences

Based on a rigorous selection from 67 proposals coming from across the world, this volume includes some of the most recent ideas and technical results in computer systems, computer science, and computer-communication networks. The book will provide the reader with timely access to innovative research from many different areas of the world where advances in computing and communications are created.

Erol Gelenbe is internationally recognised for his pioneering work in the field of computer and network performance evaluation. As a Professor at Imperial College he explores the interface between information technology and the physical and economical systems that ICT observes, operates and manages. His current research addresses the security of mobile networks, and energy savings in ICT. His work is funded by the Engineering and Science Research Council, the UK Ministry of Defense and the EU FP7 Programme. He is also on the Editorial Board Member of several IEEE, Springer, ACM, Elsevier and other journals. He recently served as a consultant for MBDA, BAE Systems, Microsoft Research and General Dynamics UK Ltd. The UK's Institution for Engineering and Technology awarded him the Oliver Lodge Medal in 2010, while ACM gave him the SIGMETRICS Life-Time Achievement Award in 2008. Other prizes include the Grand Prix France Telecom from the French Academy of Sciences in 1996, the Parlar Science Award from Turkey in 1994, and honoris causa doctorates from Belgium, Italy and Turkey. He was elected a Fellow of ACM and of IEEE and is a Member of the Science Academy of Turkey, the French National Academy of Engineering, the Hungarian Academy of Sciences, the Polish Academy of Sciences, and Academia Europaea.