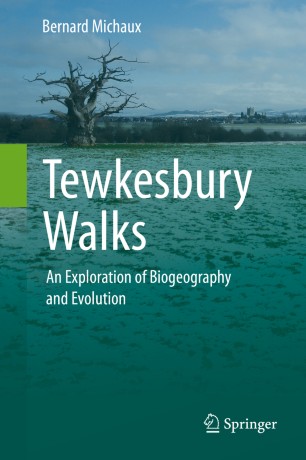 An Exploration of Biogeography and Evolution

The book is composed of eight chapters, each of which are organised as walks around the Tewkesbury (UK) countryside, which move from the specific to increasingly broader ideas. So, the MS starts with an individual’s relationship to their environment (Avon and Severn Valleys Loop) that leads to a description of conservation issues at local, national and international levels, and ultimately to a discussion of the importance of Citizen Science (Coombe Hill – Apperley –Deerhurst). The following chapter (Mythe Bridge – Forthampton – Tewkesbury) looks at science as it is actually practiced and its role in modern society by an analysis of the theory of Continental Drift and a biography of Alfred Wegener. This is a story that really deserves a much wider audience, as the idea was, in my opinion, as revolutionary as general relativity or quantum mechanics, and Wegener himself was such a heroic character. The following chapter (Tewkesbury Ham) also uses biography – this time of Alfred Russel Wallace - to investigate his ideas about how animal and plant distributions are inextricably linked to geological change. Wallace was every bit as heroic as Wegener, lived an even more adventurous life, and also deserves to be more widely known and appreciated. 2013 is the centenary of his death and he will be much in the news this year, so it would be timely to publish an account of his life and work suitable for the general public. The chapters on Wegener and Wallace set the scene for a detailed discussion of biogeography. This has been an active area of research for the past 30 years and I think it’s about time that somebody wrote about what has been an intellectually exciting and profoundly significant development in our view of ourselves and the world we live in.  ​