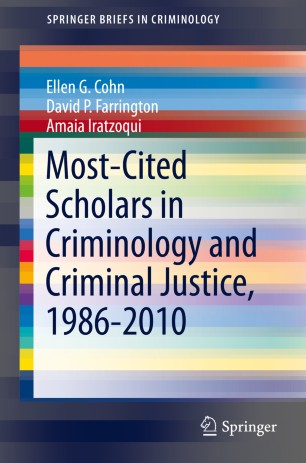 Cohn, Farrington, and Iratzoqui provide an invaluable  service  in unpacking the criminological enterprise.  Using systematic citational analysis, they illuminate the core patterns of scholarly influence that have shaped the field’s development.  This volume is an essential resource for all those wishing to understand which scholars and writings have done most—within and across time periods—to affect thinking about crime and justice.

-
Citation analyses have become one of the most significant measures of scholarly influence.  They are especially useful for revealing major trends over time regarding authors and the topics of interest to the wider field. Cohn, Farrington, and Iratzoqui's Most Cited Scholars in Criminology and Criminal Justice, 1986-2010 provides the most up-to-date, comprehensive, and longitudinal investigation of scholarly influence in criminology/criminal justice. This resource is a most interesting read, one that supplies not a mere counting of citations but clear ideas about where the field has been centered and where it is trending into the future.

Ellen G. Cohn is an Associate Professor of Criminal Justice and Affiliated Faculty in Women’s Studies at Florida International University. She is a past President and former Chair of the Board of Youth Crime Watch of America, and serves on the Board of Directors of Miami-Dade CrimeStoppers and the Miami-Dade Police Citizen Volunteer Program steering committee. She has published over 55 journal articles and book chapters, as well as two books and 30 monographs.

Amaia Iratzoqui is a doctoral student in the College of Criminology and Criminal Justice at Florida State University. She holds a Bachelors degree in Criminal Justice and a Masters degree in Public administration from Florida International University. Her current research focuses on gender and rehabilitation programming and victimization as an ongoing risk factor for offending.