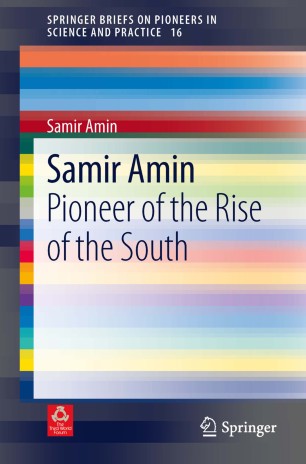 Pioneer of the Rise of the South

Part of the SpringerBriefs on Pioneers in Science and Practice book series (BRIEFSPIONEER, volume 16)

These texts by Samir Amin have been selected for the purpose of encouraging readers to learn more about his work to trace the historical trajectory of capitalism, which has consistently produced polarization at the global level.  Thus the dominated peripheries cannot hope to catch up with the social organization prevailing in the dominant centres and the impossibility of global capitalism becoming stabilized in its peripheries has resulted in the long decline of capitalism, coinciding with successive waves of active involvement by the peoples of the South to shape a new world, potentially embarking on the long journey to socialism.  Amin presents this major conflict of the 20th century and identifies the new challenges that the system now faces in the 21st century.   His analysis is conducted in terms of historical materialism and should be a useful tool for activists struggling for socialism. Their progress is linked to the emancipation of the Asian, African and Latin American peoples.

Samir Amin is an economist and one of the best-known thinkers of his generation. From 1963 he worked as a Professor at the Universities of Poitiers, Dakar, and Paris; in 1970 he became director of UN-IDEP. Since 1980 and 1997, respectively, Samir Amin has been and still is the director of the ‘Forum du Tiers Monde’ (Third World Forum) in Dakar, Senegal, and the World Forum for Alternatives.