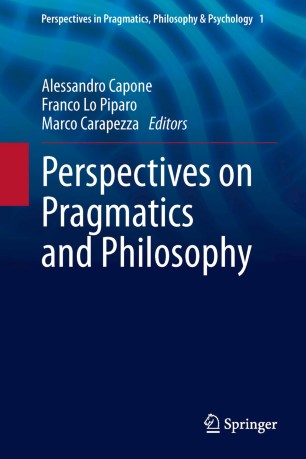 Perspectives on Pragmatics and Philosophy

This book is about the pragmatics of language and it illustrates how pragmatics transcends the boundaries of linguistics. This volume covers Gricean pragmatics as well as topics including: conversation and collective belief, the norm of assertion, speech acts, what a context is, the distinction between semantics and pragmatics and implicature and explicature, pragmatics and epistemology, the pragmatics of belief, quotation, negation, implicature and argumentation theory,  Habermas’ Universal Pragmatics, Dascal’s theory of the dialectical self, theories and theoretical discussions on the nature of pragmatics from a philosophical point of view.

Pragmatics has a role to play in dealing with philosophical problems and this volume presents research that defines boundaries and gives a stable picture of pragmatics and philosophy. World renowned academic experts in philosophy and pragmalinguistics ask important theoretical questions and interact in a way that can be easily grasped by those from disciplines other than philosophy, such as anthropology, literary theory and law.

A second volume in this series is also available, which covers the perspective of linguists who have been influenced by philosophy.

“Perspectives on Pragmatics and Philosophy, has adopted a philosophical focus to address issues within pragmatics that have a bearing on the philosophy of language. … a useful guide for the less-experienced general audience that wants to know a lot more about pragmatics; the theoretical questions raised by contributing authors, on the other hand, function as points of departure for professional researchers who are interested in exploring new (theoretical) frontiers in pragmatics as a still-young field of inquiry.” (Mohammad Ali Salmani Nodoushan, Intercultural Pragmatics, Vol. 11 (2), 2014)