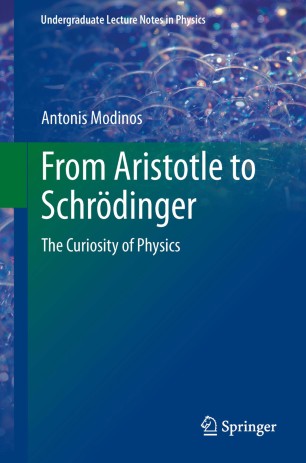 From Aristotle to Schrödinger

The Curiosity of Physics

From Aristotle to Schrödinger: The Curiosity of Physics offers a novel introduction to the topics commonly encountered in the first two years of an undergraduate physics course, including classical mechanics, thermodynamics and statistical mechanics, electromagnetism, relativity, quantum mechanics, atomic and molecular physics, and astrophysics. The book presents physics as it evolved historically; it covers in considerable depth the development of the subject from ancient Greece to the present day. Though the emphasis is on the observations, experiments, theories, and applications of physics, there are additionally short sections on the life and times of the main protagonists of physics.

This book grew out of the author's long experience in giving undergraduate and graduate courses in classical physics and in quantum mechanics and its elementary applications. Although meant primarily for the student and teacher of physics, it will be of interest to other scientists and to historians of science, and to those who wish to know something about physics, how it started, and how it developed to its present day magnificence and sophistication.

Antonis Modinos is Emeritus Professor of Physics at the National Technical University of Athens, Greece. During his career, he has taught a variety of subjects, in both physics and mathematics, at various levels, including Electromagnetism, Physical Electronics, and Mathematical Methods for Engineers and Physicists at the University of Salford, UK. He has published approximately 80 research papers (of which 4 are invited review articles) and two books, including Field, Thermionic, and Secondary Electron Emission Spectroscopy (Plenum Press, 1984); and Quantum Theory of Matter – A Novel Introduction (John Wiley & Songs, 1996).

“Intended for physics students (formal or informal) and for physics instructors at all levels, the book is a valuable supplement to standard textbooks since it focuses on key experiments, competing theories, and critical analysis that highlight how the core theories of physics have developed and changed over generations of reflective critiques. … Summing Up: Highly recommended. Lower-division undergraduates through faculty in physics; well-prepared general readers.” (J. R. Burciaga, Choice, Vol. 51 (10), June, 2014)
Buy options