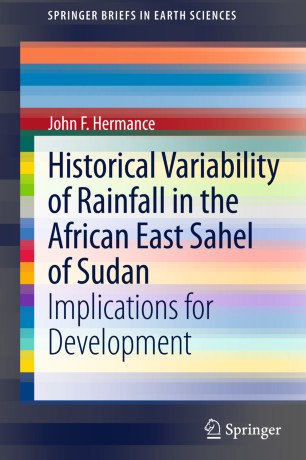 Historical Variability of Rainfall in the African East Sahel of Sudan

The northward migration of the African monsoon rains in summer, associated with the seasonal march of the Intertropical Convergence Zone (ITCZ) across the plains south of the Sahara, is the most critical asset for the livelihoods of indigenous peoples and local economies of the Sahel.  It is essential that climate science (and its publicly available database) play a key role in characterizing the variabilities of these rainfall patterns in space and time if sustainable life styles are to accommodate the expanding populations of the region.  This study turns to the East Sahel of Sudan by analyzing over 100 years of historical rainfall data from three of the few long term standard WMO rain gauge stations in substantially different rainfall settings.  From north to south, transecting the Sahel, the stations with their annual rainfall are Khartoum (130 mm); Kassala (280 mm); and Gedaref (600 mm).  The conclusions challenge a popular notion that changing climate, drought and desertification in the East Sahel may have already accelerated the deterioration of its water resources. However, any evidence of a persistent and coherent regional trend of diminishing rainfall is obscure.  Quite the contrary, the evidence demonstrates that the fluctuations of climate and weather patterns over the ensuing decades of the past century - at all temporal scales from days to years to decades - profoundly overwhelm any suggestion of a large-scale, coherent decrease (or increase) in rainfall.  The implication is that, it is not long term change, but the highly localized interseasonal, interannual and multiannual variability of rainfall that poses the greatest and most immediate societal threat from naturally-induced causes; a process constantly destabilizing an agrarian economy struggling to survive in a climate that irregularly vacillates between years of drought and years of flooding.  While this report may have some interest for climate scientists, it is primarily directed to a general readership (including students in public policy and anthropology) concerned with the availability of water in the Sahel, particularly the long term sustainability of local small-scale farms and transhumant pastoralism.