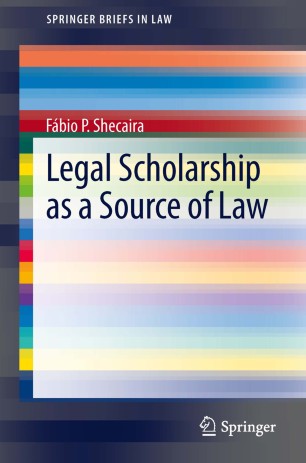 Legal Scholarship as a Source of Law

This book is about the use of legal scholarship by judges. It discusses the possibility that legal scholarship may function as a genuine source of law in modern municipal legal systems. The book advances a number of claims, some conceptual, some empirical, some normative. The major conceptual claims are found in Chapters 2 and 3, where a general account of the notion of a source of law is provided. Roughly, sources of law are documents or practices (e.g. statutes, judicial decisions, official customs) from which norms can be derived that function as sources of content-independent reasons for judges to decide legal cases one way or another. The relevant notion of content-independence is derived (with qualifications) from H.L.A. Hart’s jurisprudence. Indeed, the book’s analysis of the concept of a source of law relies at various points on Hartian insights about law and legal reasoning. Chapter 4 argues that legal scholarship – or, more precisely, a particular type of legal scholarship that might be described as standard or doctrinal – can be, and indeed is, used as a source of law in modern legal systems. The conclusion that legal scholarship is used as a source of law (and thus as a source of content-independent reasons for action) may come as a surprise to those who associate judicial recourse to legal scholarship with judicial activism. This association is discussed and criticized in Chapters 5 and 6. It is argued that, in spite of a relatively common opinion to the contrary, legal scholarship can be used to mitigate discretion. In fact, it is precisely because it can be used in this way that judges sometimes refer to scholarship deceptively and suggest that it limits discretion in situations in which it really does not. The concluding chapter addresses potential objections not explicitly discussed in earlier chapters.​