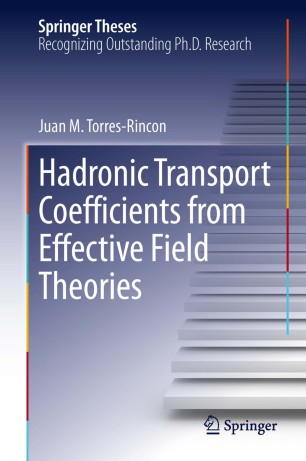 This dissertation focuses on the calculation of transport coefficients in the matter created in a relativistic heavy-ion collision after chemical freeze-out. This matter can be well approximated using a pion gas out of equilibrium. We describe the theoretical framework needed to obtain the shear and bulk viscosities, the thermal and electrical conductivities and the flavor diffusion coefficients of a meson gas at low temperatures. To describe the interactions of the degrees of freedom, we use effective field theories with chiral and heavy quark symmetries. We subsequently introduce the unitarization methods in order to obtain a scattering amplitude that satisfies the unitarity condition exactly, then go on to calculate the transport properties of the low-temperature phase of quantum chromodynamics - the hadronic medium - which can be used in hydrodynamic simulations of a relativistic heavy-ion collision and its subsequent evolution. We show that the shear viscosity over entropy density exhibits a minimum in a phase transition by studying this coefficient in atomic Argon (around the liquid-gas phase transition) and in the linear sigma model in the limit of a large number of scalar fields (which presents a chiral phase transition). Finally, we provide an experimental method for estimating the bulk viscosity in relativistic heavy-ion collisions by performing correlations of the fluctuating components of the stress-energy tensor.