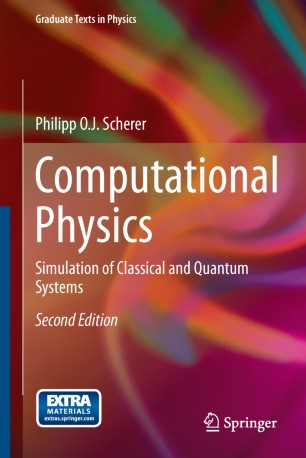 Simulation of Classical and Quantum Systems

This textbook presents basic and advanced computational physics in a very didactic style. It contains very-well-presented and simple mathematical descriptions of many of the most important algorithms used in computational physics. Many clear mathematical descriptions of important techniques in computational physics are given. The first part of the book discusses the basic numerical methods. A large number of exercises and computer experiments allows to study the properties of these methods. The second part concentrates on simulation of classical and quantum systems. It uses a rather general concept for the equation of motion which can be applied to ordinary and partial differential equations. Several classes of integration methods are discussed including not only the standard Euler and Runge Kutta method but also multistep methods and the class of Verlet methods which is introduced by studying the motion in Liouville space. Besides the classical methods, inverse interpolation is discussed, together with the popular combined methods by Dekker and Brent and a not so well known improvement by Chandrupatla. A general chapter on the numerical treatment of differential equations provides methods of finite differences, finite volumes, finite elements and boundary elements together with spectral methods and weighted residual based methods. A comparison of several methods for quantum systems is performed, containing pseudo-spectral methods, finite differences methods, rational approximation to the time evolution operator, second order differencing and split operator methods.
The book gives simple but non trivial examples from a broad range of physical topics trying to give the reader insight into the numerical treatment but also the simulated problems. Rotational motion is treated in much detail to describe the motion of rigid rotors which can be just a simple spinning top or a collection of molecules or planets. The behaviour of simple quantum systems is studied thoroughly. One focus is on a two level system in an external field. Solution of the Bloch equations allows the simulation of a quantum bit and to understand elementary principles from quantum optics. As an example of a thermodynamic system, the Lennard Jones liquid is simulated. The principles of molecular dynamics are shown with practical simulations. A second thermodynamic topic is the Ising model in one and two dimensions. The solution of the Poisson Boltzman equation is discussed in detail which is very important in Biophysics as well as in semiconductor physics. Besides the standard finite element methods, also modern boundary element methods are discussed. Waves and diffusion processes are simulated. Different methods are compared with regard to their stability and efficiency. Random walk models are studied with application to basic polymer physics. Nonlinear systems are discussed in detail with application to population dynamics and reaction diffusion systems. The exercises to the book are realized as computer experiments. A large number of Java applets is provided. It can be tried out by the reader even without programming skills. The interested reader can modify the programs with the help of the freely available and platform independent programming environment "netbeans".

Prof. Scherer received his PhD in experimental and theoretical physics in 1984. He joined the National Institute of Advanced Industrial Science and Technology (AIST) in Tsukuba, Japan, as a visiting scientist in 2001 and 2003. His area of research includes biomolecular physics and the computer simulation of molecular systems with classical and quantum methods. He has published books on theoretical molecular physics and computational physics.

“The well-written monograph about computational physics is based on two-semester lecture courses given by the author on a period of several years for undergraduate physics and biophysics students … . convenient for students and practitioners of computer science, chemistry, and mathematics who are interested in applications of numerical methods in physics and engineering sciences. … well-organized book with a concentration to the important ideas of the methods and physical applications including software, examples, illustrations, and references to further reading.” (Georg Hebermehl, zbMATH, Vol. 1303, 2015)
Buy options