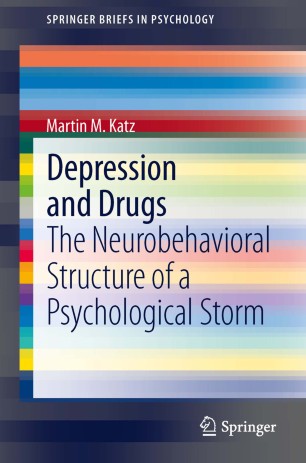 The Neurobehavioral Structure of a Psychological Storm

In the 1950s, psychiatric "miracle drugs" revolutionized the treatment of depression, improving the quality of life of countless patients. Over half a century and millions of prescriptions later, advances in brain structure, neurochemistry, and genetics are providing clues to the mechanisms of depression and pointing to new therapeutic possibilities.

Depression and Drugs makes the most of these recent developments, introducing both a neurobehavioral theory of chemical/behavioral interactions and a practical framework for modernizing the conceptualization, assessment, and treatment of depression. Its multidimensional analysis offers insights into the brain structures most affected by the disorder, and the complex phenomena involved in medication. By focusing on cognitive, behavioral, and mood effects as well as brain chemistry, the author identifies false leads that have led to impasses in developing better antidepressants and explains why "mild" cases are often the hardest to treat. These groundbreaking ideas bring readers their closest to scientifically answering the eternal questions How do depressive states form? and How do drugs resolve them? Included in the coverage:

Dr. Katz received his PhD from the University of Texas in psychology and physiology in 1955. From 1958 to 1968, he served in the National Institute of Mental Health's (NIMH) newly formed branch on psychopharmacology as Executive Secretary of the Institute's 1st Psychopharmacology Advisory Committee, then, in 1965 as head of its Special Studies Section. In 1968 he was appointed Chief of the NIMH’s Clinical Research Branch. That program was charged with expanding research on the causes and treatment of schizophrenia and the affective disorders. It initiated national conferences and developed landmark collaborative programs on the testing of the new biochemical and clinical theories of the genesis of the disorders. The biology and clinical Collaborative and the Clinical Center programs created by Dr. Katz and Branch staff (1970–1978), were responsible for the training of many young investigators and provided needed methodology for expanding research in these fields. He co-chaired the Clinical and Biological Collaborative programs in their early development. The Collaborative programs were in operation for several decades under NIMH grants. In 1984, he joined the psychiatry faculty at Albert Einstein College of Medicine in New York as Professor and established the 1st Division of Psychology and Laboratory of Psychopathology at the College. Since 1996, he has been an Adjunct Professor in the Department of Psychiatry, University of Texas Health Sciences Center at San Antonio, where he has conducted grant-supported research on the “biological aspects of depression” and the neurobehavioral mechanisms of action of antidepressant drugs".

"Dr. Katz’s career was completely contemporaneous with the introduction of imipramine into psychiatry and was actively involved with most aspects of studies in the area of depression and its treatment  and evaluation,. He was a primary player in the United States National Institute of Mental Health (NIMH) Collaborative Psychobiology of   Depression Program launched in 1970 and ran for 10 years.  He was involved in very many of the NIMH and United States Veterans Administration (VA) collaborative studies in these areas.  This background together with his own research on the clinical assessment concerns about the methods and the approaches used for the evaluation of change caused him considerable concern. He then undertook methods to develop new approaches that might present an evaluation of different facets of the clinical state. From his position he was perfectly situated to look at the data from all points of the compass, His conclusions offer the reader a very sobering picture of our current status of knowledge and he concludes we need to reevaluate our many positions and beliefs.  He quotes a Collegium Internatinale Neuro-Psychopharmacologicum (CINP) task force report "we still have found no biological ‘markers’ of the disorder nor are we completely clear as to mechanisms underlying their efficacy in depression" or their mode of action. He goes on to note the vast disparity in accumulated knowledge in genetics and neurosciences with the fact that no new compounds have been developed in the last 30 odd years. He feels that part of the problem may be in the central clinical problems in this area as well as the design and assessment aspects of the study He has spent many years of his own research in trying to address these questions. In conclusion the volume forces us to look at these discrepancies with these new approaches in mind."
Samuel Gershon
Professor at University of Miami, Department of Psychiatry
August 15, 2013

"We all have to listen carefully when a psychologist has released a book on the treatment of depression with drugs. Even more so when the psychologist is Martin Katz who was executive secretary of the first advisory committee to Jonathan Cole’s Psychopharmacology Service Centre in the USA in the late 1950s, and was director of the Laboratory of Experimental Psychology in Herman van Praag’s Department of Psychiatry at Albert Einstein University in New York in the early 1990s.
The neurobehavioral approach to depression is described in this small and well-written book in which Martin Katz links the functioning of the serotonergic and noradrenergic neurotransmitter systems in the brain to different clinical components of depressive states. Katz’s story is in a certain sense the opposite story to Arvid Carlsson’s when identifying the functioning of these neurotransmitter systems. Carlsson was inspired by the work of the experienced psychiatrist, Paul Kielholz who found clomipramine to be the most potent mood activating tricyclic antidepressant and desipramine to be the most motor activating tricyclic antidepressant. Building on Kielholz’s clinical findings Carlsson showed that the dual actions of these antidepressant drugs entailed an initial effect on serotonin reuptake inhibition and thereafter an effect on noradrenaline reuptake inhibition. Had Carlsson accepted the claims in many reviews that all antidepressants have the same therapeutic profile he would not have been able to discover what he did.  In the same way, had Martin Katz followed meta-analytic findings he would not have discovered that the profile of clinical depression is a psychological storm, a state of psychological turmoil, a term he borrowed from William Styron’s description of his own depressive illness in his book,  Darkness Visible. Using principal component analysis in clinical trials with both the Hamilton Depression Scale and the self-reported Symptom Checklist (SCL-90) Katz and his co-authors identified three components explaining 75% of the variance. The three components are: depressed mood, anxiety-arousal symptoms, including sleep, and hostility – interpersonal sensitivity.
Using these three components Katz compared the serotonin reuptake inhibitor paroxetine and the noradrenaline (norepinephrine) reuptake inhibitor desipramine in a placebo-controlled study.  In patients who had a good clinical response it was possible to show within the first two weeks of therapy that drugs acting on serotonin reuptake have an effect on anxiety as well as on hostility some days before their action on noradrenaline and depression.
On the basis of his findings Katz’s recommendation to the industry is that clinical trials with new potential antidepressant need not last more than two weeks, and that the classical practice of relying only on the total score on the Hamilton Depression Scale might result in the throwing out of many good babies, good drugs,  with the bathwater.
In 1994 Martin Katz asked in a paper whether we are doing the right thing when we are using the traditional meta-analytic studies with the total Hamilton score as outcome measure in clinical trials with antidepressants. Over the last two decades Katz has confirmed that using the total Hamilton score is wrong. His small book tells us how to perform clinical trials with antidepressants. All those who are searching to find new antidepressants with a more rapid mode of action than the ones in clinical use need to read his book - listen to the words of the wise."
Per Bech, author, leader in Psychometics
University of Copenhagen
September 19, 2013