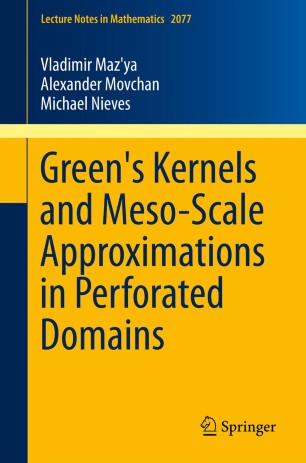 There are a wide range of applications in physics and structural mechanics involving domains with singular perturbations of the boundary. Examples include perforated domains and bodies with defects of different types. The accurate direct numerical treatment of such problems remains a challenge. Asymptotic approximations offer an alternative, efficient solution.
Green’s function is considered here as the main object of study rather than a tool for generating solutions of specific boundary value problems. The uniformity of the asymptotic approximations is the principal point of attention. We also show substantial links between Green’s functions and solutions of boundary value problems for meso-scale structures. Such systems involve a large number of small inclusions, so that a small parameter, the relative size of an inclusion, may compete with a large parameter, represented as an overall number of inclusions.
The main focus of the present text is on two topics: (a) asymptotics of Green’s kernels in domains with singularly perturbed boundaries and (b) meso-scale asymptotic approximations of physical fields in non-periodic domains with many inclusions. The novel feature of these asymptotic approximations is their uniformity with respect to the independent variables.
This book addresses the needs of mathematicians, physicists and engineers, as well as research students interested in asymptotic analysis and numerical computations for solutions to partial differential equations.