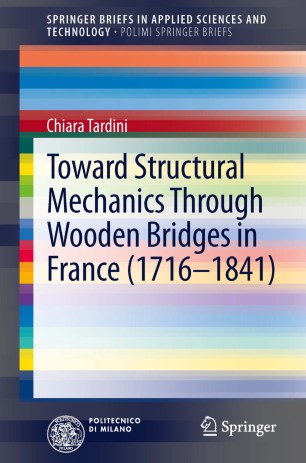 Toward Structural Mechanics Through Wooden Bridges in France (1716-1841)

Early applications of Navier’s beam theory to the rational design of structures are documented in the Annales of the French Ecole des Ponts et Chaussées and refer to the design of three wooden bridges built in France in the 1840's. Revisiting these examples, the book provides documentation on the progressive establishment of the new design approach, based on the theory of structural mechanics rather than empirical knowledge. The bridges concerned were built according to the structural scheme patented by Ithiel Town in the USA, witnessing the diffusion in Europe of the American advancements in bridge design, circulated by the travel reports of French engineers from the Ecole.
Through the exam of French treatises discussing the progress of theoretical formulations in parallel with experimental findings in the 18th and 19th centuries, the book retraces as well the long path which led to the formulation of Navier’s theory. The relevant scientific debate dealt mainly with the specific case of wood bridges; the text outlines a brief history of bridges built in the Alpine area at the time, based on unpublished iconographic materials from various European archives.

“This booklet is an important source of information, especially about building practices and the evolution of knowledge of structural mechanics in France. It is a thorough investigation of the primary sources quoted by Tardini. … It is a book for people who already have a basic knowledge of modern structural mechanics who are curious about the history of that discipline. It represents an excellent starting point for further studies and discussions.” (Tiziana Bascelli, Mathematical Reviews, February, 2015)