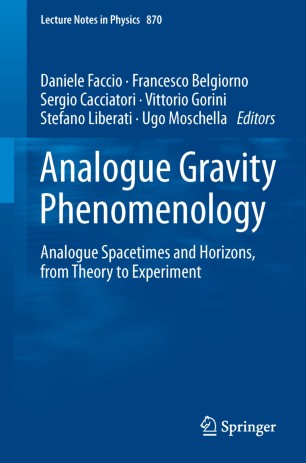 Analogue Spacetimes and Horizons, from Theory to Experiment

Analogue Gravity Phenomenology is a collection of contributions that cover a vast range of areas in physics, ranging from surface wave propagation in fluids to nonlinear optics. The underlying common aspect of all these topics, and hence the main focus and perspective from which they are explained here, is the attempt to develop analogue models for gravitational systems. The original and main motivation of the field is the verification and study of Hawking radiation from a horizon: the enabling feature is the possibility to generate horizons in the laboratory with a wide range of physical systems that involve a flow of one kind or another. The years around 2010 and onwards witnessed a sudden surge of experimental activity in this expanding field of research. However, building an expertise in analogue gravity requires the researcher to be equipped with a rather broad range of knowledge and interests. The aim of this book is to bring the reader up to date with the latest developments and provide the basic background required in order to appreciate the goals, difficulties and success stories in the field of analogue gravity.

Each chapter of the book treats a different topic explained in detail by the major experts for each specific discipline. The first chapters give an overview of black hole spacetimes and Hawking radiation before moving on to describe the large variety of analogue spacetimes that have been proposed and are currently under investigation. This introductory part is then followed by an in-depth description of what are currently the three most promising analogue spacetime settings, namely surface waves in flowing fluids, acoustic oscillations in Bose-Einstein condensates and electromagnetic waves in nonlinear optics. Both theory and experimental endeavours are explained in detail. The final chapters refer to other aspects of analogue gravity beyond the study of Hawking radiation, such as Lorentz invariance violations and Brownian motion in curved spacetimes, before concluding with a return to the origins of the field and a description of the available observational evidence for horizons in astrophysical black holes.