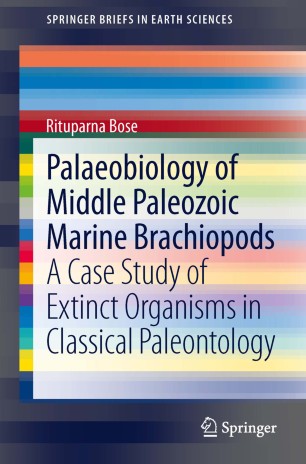 A Case Study of Extinct Organisms in Classical Paleontology

Fossil species appear to persist morphologically unchanged for long intervals of geologic time, punctuated by short bursts of rapid change as explained by the Ecological Evolutionary Units (EEUs). Here, morphological variation in Paleozoic atrypide morphology at the subfamily level (Atrypinae and Variatrypinae) from the Silurian and Devonian time intervals in the third Paleozoic EEU (~444-359 my) were investigated using relatively new techniques of quantitative modeling. The study explains how a group of closely related taxa in atrypide subfamilies exhibit morphological conservation through time in P3 EEU within the Eastern North America region.

Dr. Rituparna Bose obtained her Ph.D. from Indiana University, Bloomington. For her outstanding Ph.D. dissertation she was rewarded with a Springer Theses Prize. She is currently an adjunct Assistant Professor at the City University of New York and has been interviewed as an expert in the field of biodiversity by the Times of India (leading news daily in her home country). She has won numerous awards in her career including the nationally recognized Theodore Roosevelt Memorial Grant awarded by the American Museum of Natural History.

She has been recently invited to serve as an Editor for Acta Palaeontologica Sinica by the Chinese Academy of Sciences. She is the Associate Editor-in-Chief for the International Journal of Environmental Protection and the Associate Editor for the Journal of Geography and Geology at the Canadian Center of Science. She also serves on the editorial board of some of the most prestigious journals in geology including Historical Biology: An International Journal of Palaeobiology (Taylor and Francis), Bulletins of American Paleontology (Paleontological Research Institute, Cornell University), Springer Plus (Earth and Environmental Science) and Geological Journal (Wiley).