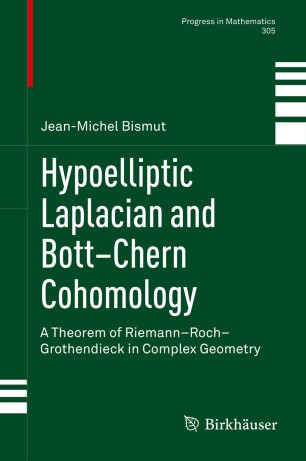 A Theorem of Riemann–Roch–Grothendieck in Complex Geometry

Part of the Progress in Mathematics book series (PM, volume 305)

The book provides the proof of a complex geometric version of a well-known result in algebraic geometry: the theorem of Riemann–Roch–Grothendieck for proper submersions. It gives an equality of cohomology classes in Bott–Chern cohomology, which is a refinement for complex manifolds of de Rham cohomology. When the manifolds are Kähler, our main result is known. A proof can be given using the elliptic Hodge theory of the fibres, its deformation via Quillen's superconnections, and a version in families of the 'fantastic cancellations' of McKean–Singer in local index theory. In the general case, this approach breaks down because the cancellations do not occur any more. One tool used in the book is a deformation of the Hodge theory of the fibres to a hypoelliptic Hodge theory, in such a way that the relevant cohomological information is preserved, and 'fantastic cancellations' do occur for the deformation. The deformed hypoelliptic Laplacian acts on the total space of the relative  tangent bundle of the fibres. While the original hypoelliptic Laplacian discovered by the author can be described in terms of the harmonic oscillator along the tangent bundle and of the geodesic flow, here, the harmonic oscillator has to be replaced by a quartic oscillator. Another idea developed in the book is that while classical elliptic Hodge theory is based on the Hermitian product on forms, the hypoelliptic theory involves a Hermitian pairing which is a mild modification of intersection pairing. Probabilistic considerations play an important role, either as a motivation of some constructions, or in the proofs themselves.

Jean-Michel Bismut is Professor of Mathematics at Université Paris-Sud (Orsay) and a member of the Académie des Sciences. Starting with a background in probability, he has worked extensively on index theory. With Gillet, Soulé, and Lebeau, he contributed to the proof of a theorem of Riemann–Roch–Grothendieck in Arakelov geometry. More recently, he has developed a theory of the hypoelliptic Laplacian, a family of operators that deforms the classical Laplacian, and provides a link between spectral theory and dynamical systems.