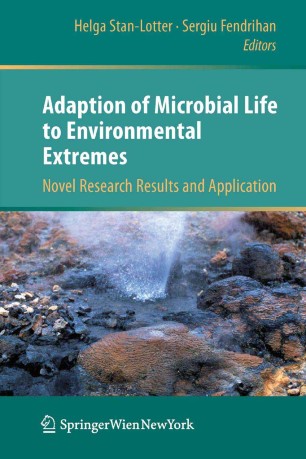 Once considered exceptional rarities, extremophiles have become attractive objects for basic and applied research ranging from nanotechnology to biodiversity to the origins of life and even to the search for extraterrestrial life. Several novel aspects of extremophiles are covered in this book; the focus is firstly on unusual and less explored ecosystems such as marine hypersaline deeps, extreme cold, desert sands, and man-made clean rooms for spacecraft assembly. Secondly, the increasingly complex field of applications from extremophile research is treated and examples such as novel psychrophilic enzymes, compounds from halophiles, and detection strategies for potential extraterrestrial life forms are presented.

Helga Stan-Lotter has studied general and clinical microbiology as well as biochemistry at the Technical University of Munich; she received her PhD at the Max-Plack Institute in Martinsried, Germany and worked as Post Doctoral Assistant at the Universities of Vancouver and Calgary in Canada. During her post doctoral training Helga Stan-Lotter analysed effects of antibiotics on bacteria and studied bacterial membrane proteins. She received a Fellowship from the USA National Research Council to analyse the evolution of energy transfer at bacterial membranes, which led to a still lasting cooperation with the NASA at the SETI Institute, University of Santa Cruz. She was Lecturer and Project leader at the University of Vienna and was appointed Professor in Microbiology at the University of Salzburg in 1994.

Sergiu Fendrihan was born in Campina, Romania in an intellectual family. He graduated at the Faculty of Biology from Bucharest University in 1979, and then worked in a factory of Pharmaceuticals and after this occupied different research positions in several research institutes in Romania, working part time as assistant professor of plant protection and plant pathology at a private university in Bucharest. He was guest scientist at the University of Salzburg Austria for many years and he is the founder of the first Bio Resource Centre in Romania, in order to establish the national collections of micro-organisms and cell lines. Sergiu Fendrihan is author of many books and articles in microbiology, plant protection and cultural heritage protection.

“This book is a high-quality series of edited papers covering a diversity of topics in this area. It begins with a concise introduction to the physicochemical limits to life. … The book includes color illustrations on good paper. Overall, this volume does its job: the reader will receive an up-to-date entrée into the diverse literature on the study of extremophiles and their relation to astrobiology. Summing Up: Recommended. Upper-division undergraduates and above; general readers.” (P. K. Strother, Choice, Vol. 50 (1), September, 2012)
Buy options