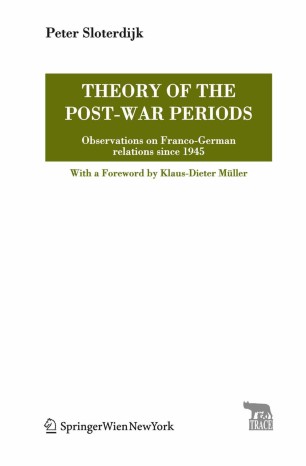 Theory of the Post-War Periods

Observations on Franco-German relations since 1945

Klaus-Dieter Müller Following defeat in battle every culture receives the oppor- nity to re-evaluate its normative basic attitudes or as Sloterdijk puts it ‘its moral grammar’. Procedures of this kind either end in a process assuming energies of revenge or the decision is made to transform the cultural rules ascertained as detrimental to behavioural patterns of a less harmful form. Is there such a thing as a civilizing in?uence of cultures by reorientation which brings about post-heroic values? Peter Sloterdijk uses the term ‘metanoia’ to describe this process. He does not mean by this Christian repentance but pragmatic relearning in order to - crease civilisational viability (see p. 14). Sloterdijk calls the victor’s post-stressory work of evaluation ‘af?rmation’. In his, in reference to ‘metanoia’ and ‘af?rmation’, exemplary “excursion into the jubilee culture” of Franco-German re- tions Sloterdijk awards the Germans a “process which at no time complicated but also at no time threatened the metanoe- ical tranformation process of the vanquished German people”, which in its extreme forms consisted of triumphant self-hate and aggression towards each and every national tradition.This is re?ected in the biographies of many Germans. In my case it was the same as in many other families, quarrels arose as to guilt and responsibility.

Peter Sloterdijk was born in 1947. He studied philosophy, German and History in Munich from 1968 to 1974. He has worked as a freelance writer since 1980, and published a number of articles and books on time diagnosis, cultural and religious philosophy, art theory and psychology. Sloterdijk has been a professor of philosophy and media theory at the Karlsruhe School of Design since 1992. He took charge of the Institute for Cultural Philosophy of the Academy of Fine Arts in Vienna in 1993. Sloterdijk became the director of the Karlsruhe School of Design in 2001 and has also received a number of awards including the Christian-Kellerer Prize for the future of philosophical thought, and he was named a, "Commandeur de l´Ordre des Arts et des Lettres," by the Republic of France. He also recently received the 2008 Lessing Prize for criticism.