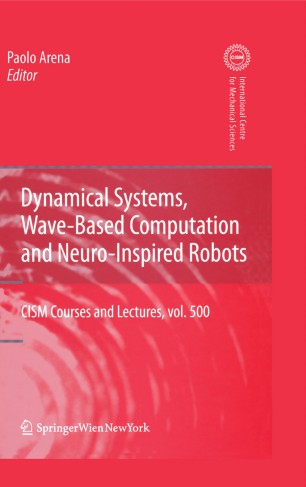 This volume is a special Issue on "Dynamical Systems, Wave based computation and neuro inspired robots'^ based on a Course carried out at the CISM in Udine (Italy), the last week of September, 2003. From the topics treated within that Course, several new ideas were f- mulated, which led to a new kind of approach to locomotion and p- ception, grounded both on biologically inspired issues and on nonlinear dynamics. The Course was characterised by a high degree of multi disciplinarity. In fact, in order to conceive, design and build neuro inspired machines, it is necessary to deeply scan into different d- ciplines, including neuroscience. Artificial Intelligence, Biorobotics, Dynamical Systems theory and Electronics. New types of moving machines should be more closely related to the biological rules, not discarding the real implementation issues. The recipe has to include neurobiological paradigms as well as behavioral aspects from the one hand, new circuit paradigms, able of real time control of multi joint robots on the other hand. These new circuit paradigms are based on the theory of complex nonlinear dynamical systems, where aggregates of simple non linear units into ensembles of lattices, have the pr- erty that the solution set is much richer than that one shown by the single units. As a consequence, new solutions ^'emerge'\ which are often characterized by order and harmony.