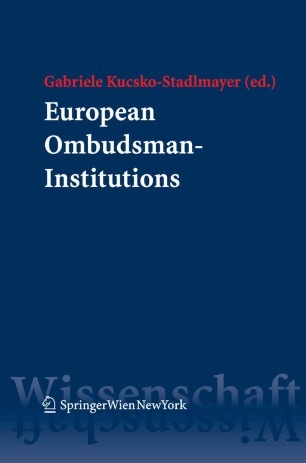 A comparative legal analysis regarding the multifaceted realisatin of an idea

This book aims to comprehensively demonstrate the legal basis of parliamentary ombudsman institutions throughout Europe, analysing them in a comparative way and thereby revealing their organisational and functional diversity. It comprises the results of a research project carried out at the University of Vienna under the direction of the editor which was also intended to provide an incentive for the discussion of the legal political enhancement of such institutions.

The book starts with the comparative legal analysis, followed by forty-nine reports on the ombudsmen of the different European States as well as the European Ombudsman. The reports pursue a uniform scheme of structure to ensure the comparability of information on the various institutions. They were each based on the relevant constitution or statutory act, the responses to the questionnaires which were sent out in the course of the project, as well as the information resulting from the activity reports.