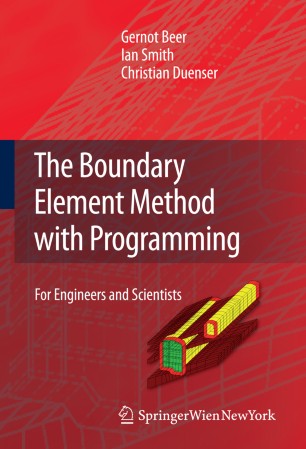 The Boundary Element Method with Programming

For engineers and scientists

This is a sequel to the book “Programming the Boundary Element Method” by G. Beer published by Wiley in 2001. The scope of this book is different however and this is reflected in the title. Whereas the previous book concentrated on explaining the implementation of a limited range of problems into computer code and the emphasis was on programming, in the current book the problems covered are extended, the emphasis is on explaining the theory and computer code is not presented for all topics. The new topics covered range from dynamics to piezo-electricity. However, the main idea, to provide an explanation of the Boundary Element Method (BEM), that is easy for engineers and scientists to follow, is retained. This is achieved by explaining some aspects of the method in an engineering rather than mathematical way. Another new feature of the book is that it deals with the implementation of the method on parallel processing hardware. I. M. Smith, who has been involved in programming the finite element method for decades, illustrates that the BEM is “embarrassingly parallelisable”. It is shown that the conversion of the BEM programs to run efficiently on parallel processing hardware is not too difficult and the results are very impressive, such as solving a 20 000 element problem during a “coffee break”.

Gernot Beer is Professor and head of the Institute for Structural Analysis at the Graz University of Technology. He has been involved in the development, teaching and application of the BEM and the coupled BEM/FEM and has written several texts on the subject. He is the author of the commercial program BEFE and heads the development of its successor BEFE++.

Ian M. Smith is Professor of Engineering at the University of Manchester. He has consulted widely on engineering projects and has written several texts on applied numerical analysis.

Christian Dünser is staff scientist at the Institute for Structural Analysis at the Graz University of Technology. Since his diploma thesis he has been working on the BEM and its application to geotechnical problems, in particular tunnelling.