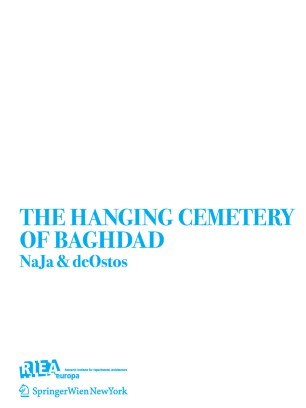 The Hanging Cemetery of Baghdad

The London-based NaJa and deOstos architecture office was founded by Nannette Jackowski and Ricardo de Ostos as a platform for experimental architecture. The architects run their office as a studio that tackles the challenges arising from the manifold possibilities presented by urban situations and social dynamics by developing alternative urban concepts. One of their projects is the "Hanging Cemetery of Baghdad”, which they have continuously developed since 2004. In his introduction, Peter Cook says that as an architect, one could essentially go into denial in view of the harrowing situation in Baghdad. NaJa and deOstos research the situation and react with the language of experimental architecture.

Nannette Jackowski was born in Germany. She studied at the Bartlett School of Architecture. She has worked at WilkinsonEyre.Architects, London since 2004 and runs the NaJa & deOstos studio together with Ricardo de Ostos.

Ricardo de Ostos was born in England; he studied at the Bartlett School of Architecture. He has worked at Foster and Partners, London since 2004 and runs the NaJa & deOstos studio together with Nannette Jackowski.