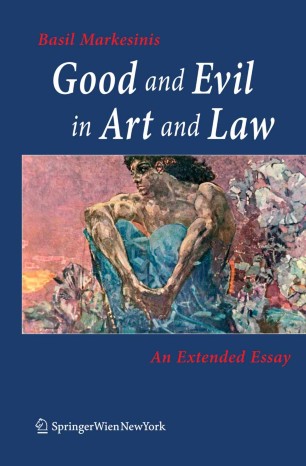 Good and Evil in Art and Law

People complain about our system of justice and how it deals with villains. If it is not the government complaining about how lenient judges are, it is the Press whining about inadequately punished rapists or the premature release of prisoners. There are also frequent calls for more criminals to be committed to prison and predictions of an apocalypse if the law continues to strive for balanced solutions.

This is an interdisciplinary essay. It looks at art and especially literature in juxtaposition with law and speculates how the two disciplines approach, in their separate but inter-related ways, the notions of "good" and "evil". Full of detail, it examines how the two disciplines deal with these notions, why the evil-doer is often agrandicized in literature but is base in real life and how good and evil change with time. Though one discipline cannot influence the reasoning process of the other, this book, addressed to the general educated reader, is a plea for a broader humanistic education.

Sir Basil Markesinis is an honorary QC and holds doctorates or honorary doctorates from (in alphabetical order) Athens, Cambridge, Ghent, Munich, Oxford, and Paris I (Panthéon-Sorbonne). After holding successively the Chairs of European Law and then Comparative Law at the University of Oxford, where he founded the Oxford Institute of European and Comparative Law, he moved to University College London to the Chair of Common and Civil Law, which he holds simultaneously with the (part-time but tenured) Jamail Regents Chair at the University of Texas at Austin.

He has authored or co-authored twenty-nine books and over one hundred twenty legal articles, which have been published in leading law journals in America, Belgium, England, France, Germany, Greece, Italy, and the Netherlands. He has lectured extensively in twenty-five different law faculties including Cornell, Ghent, Leiden, Michigan, Munich, Paris I, Paris II, Rome, and Siena, where he has held Visiting Professorships. He is a Fellow of the British Academy, a Corresponding Fellow of the French Academy, a Foreign Fellow of the Italian Academy (Accademia Nazionale dei Lincei), the Royal Belgian and the Royal Netherlands Academies, a Corresponding Fellow of the Academy of Athens, and a Member of the American Law Institute. In 2002 he was appointed Conseiller Scientifique du Premier Président de la Cour de Cassation (France) on matters of European law. Besides his academic work, Sir Basil has advised many Government Ministers on both sides of the Channel on matters concerning Europe and, between 1997 and 2001, he also served as Special Advisor on Eurpean matters to the multi-national firm of Clifford Chance. For his academic work and other services Sir Basil has received high decorations from the Presidents of France (three times), Germany (three times), Greece, and Italy (three times). Most recently (2002) he was promoted by the President of Italy to the highest rank of the Italian Order of Merit, Knight Grand Cross, while the President of Germany awarded him the insignia of Knight Commander of the Order of Merit, in May 2003. He was made Knight Bachelor by Her Majesty Queen Elizabeth II in the New Year of 2005 for "Distinguished Services to International Legal Relations"