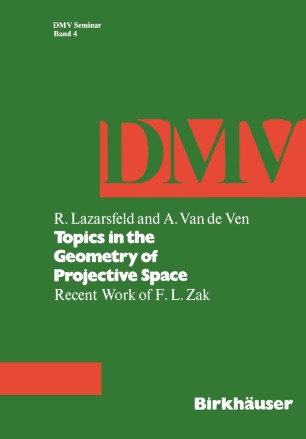 Topics in the Geometry of Projective Space

The main topics discussed at the D. M. V. Seminar were the connectedness theorems of Fulton and Hansen, linear normality and subvarieties of small codimension in projective spaces. They are closely related; thus the connectedness theorem can be used to prove the inequality-part of Hartshorne's conjecture on linear normality, whereas Deligne's generalisation of the connectedness theorem leads to a refinement of Barth's results on the topology of varieties with small codimension in a projective space. The material concerning the connectedness theorem itself (including the highly surprising application to tamely ramified coverings of the projective plane) can be found in the paper by Fulton and the first author: W. Fulton, R. Lazarsfeld, Connectivity and its applications in algebraic geometry, Lecture Notes in Math. 862, p. 26-92 (Springer 1981). It was never intended to be written out in these notes. As to linear normality, the situation is different. The main point was an exposition of Zak's work, for most of which there is no reference but his letters. Thus it is appropriate to take an extended version of the content of the lectures as the central part of these notes.