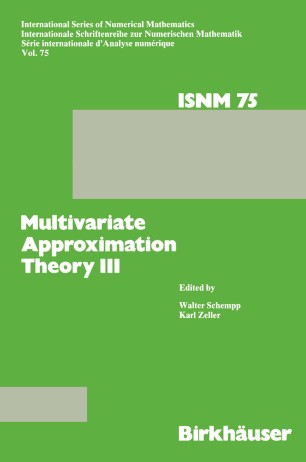 Proceedings of the Conference at the Mathematical Research Institute at Oberwolfach, Black Forest, January 20–26, 1985

The Fourth International Symposium on Multivariate Approximation Theory was held at the Oberwolfach Mathematical Research Insti­ tute, Black Forest, W.-Germany, during the week of January 20 - 26, 1985. The preceding conferences on this topic were held in 1976, 1979, and 1982 * . We were pleased to have more than 50 mathematicians from 13 countries in attendance. The program in­ cluded 40 lectures. These Proceedings form a record of most of the papers presented at the Symposium. The topics treated cover different problems on multivariate approximation such as polynomial approximation on simplices, multivariate splines (box-splines, dimension of spline spaces), blending methods, multivariate Hermite interpolation, data smoothing and surface representation, and multivariate summation methods. We would like to thank the director of the Oberwolfach Mathe­ matical Research Institute, Prof. Dr. M. Barner, and his staff for providing the facilities. Of the people who gave their time to help make this conference a success, we would like to mention in particular Prof. Dr. F.J. Delvos (Siegen), Dr. G. Baszenski (College Station, Texas), and Dipl.-Math. H. Nienhaus (Siegen). Finally, our thanks are due to Carl Einsele of Birkhauser Publishers for his valuable cooperation.