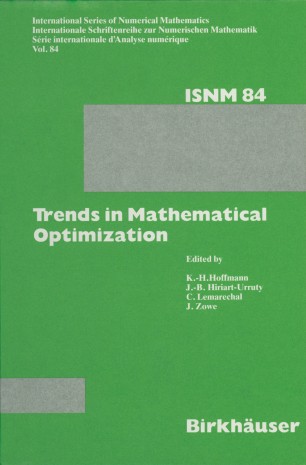 This volume contains a collection of 23 papers presented at the 4th French-German Conference on Optimization, hold at Irsee, April 21 - 26, 1986. The conference was aUended by ninety scientists: about one third from France, from Germany and from third countries each. They all contributed to a highly interesting and stimulating meeting. The scientifique program consisted of four survey lectures of a more tutorical character and of 61 contributed papers covering almost all areas of optimization. In addition two informal evening sessions and a plenary discussion on further developments of optimization theory were organized. One of the main aims of the organizers was to indicate and to stress the increasing importance of optimization methods for almost all areas of science and for a fast growing number of industry branches. We hope that the conference approached this goal in a certain degree and managed to continue fruitful discussions between -theory­ and -applications-. Equally important to the official contributions and lectures is the -nonmeasurable­ part of activities inherent in such a scientific meeting. Here the charming and inspiring atmosphere of a place like Irsee helped to establish numerous new contacts between the participants and to deepen already existing ones. The conference was sponsored by the Bayerische Kultusministerium, the Deutsche Forschungsgemeinschaft and the Universities of Augsburg and Bayreuth. Their interest in the meeting and their assistance is gratefully acknowledged. We would like to thank the authors for their contributions and the referees for their helpful comments.