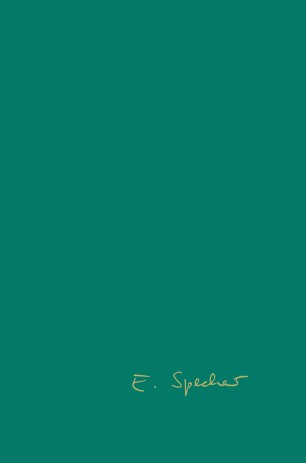 Ernst Specker has made decisive contributions towards shaping direc­ tions in topology, algebra, mathematical logic, combinatorics and algorith­ mic over the last 40 years. We have derived great pleasure from marking his seventieth birthday by editing the majority of his scientific publications, and thus making his work available in a unified form to the mathematical community. In order to convey an idea of the richness of his personality, we have also included one of his sermons. Of course, the publication of these Selecta can pay tribute only to the writings of Ernst Specker. It cannot adequately express his originality and wisdom as a person nor the fascination he exercises over his students, colleagues and friends. We can do no better than to quote from Hao Wang in the 'Festschrift' Logic and Algorithmic I: Specker was ill for an extended period before completing his formal education. He had the leisure to think over many things. This experi­ ence may have helped cultivating his superiority as a person. In terms of traditional Chinese categories, I would say there is a taoist trait in him in the sense of being more detached, less competitive, and more under­ standing. I believe he has a better sense of what is important in life and arranges his life better than most logicians. We are grateful to Birkhauser Verlag for the production of this Selecta volume. Our special thanks go to Jonas Meon for sharing with us his intimate knowledge of his friend Ernst Specker.