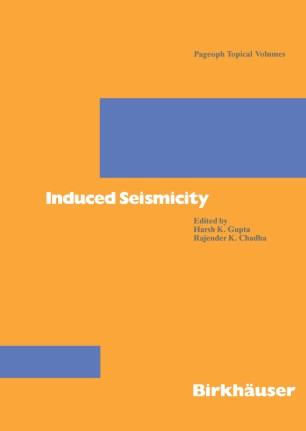 A workshop on Induced Seismicity was organized during the 27th General Assembly of the International Association of Seismology and Physics of Earth's Interior (IASPEI) in Wellington, New Zealand during January 10-21, 1994. This volume presents a collection of 16 papers accepted for publication which accrued from this workshop. The first three papers address mining activity related to induced seismicity. The fourth paper deals with water injection induced seismic activity, while the remaining 12 papers treat several aspects of water reservoir induced earthquakes. Globally, the Koyna dam creating Shivajisagar Lake in Maharashtra, India, continues to be the most significant site of reservoir-induced earthquakes. With the increase in the number of cases of induced seismicity, there is a growing concern among planners, engineers, geophysicists and geologists to understand the environment conducive to this phenomenon. While the changes in pore-fluid pressure have been identified as the key factor in inducing earthquakes, the phenomenon itself is still poorly understood. This reality thus makes the study of the induced seismicity very important and this volume timely.