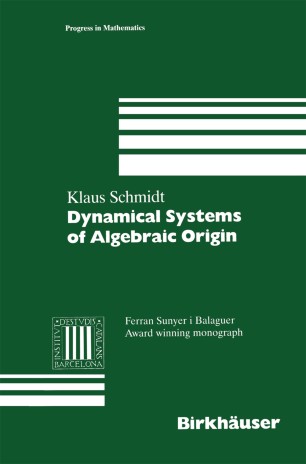 Part of the Progress in Mathematics book series (PM, volume 128)

Although the study of dynamical systems is mainly concerned with single trans­ formations and one-parameter flows (i. e. with actions of Z, N, JR, or JR+), er­ godic theory inherits from statistical mechanics not only its name, but also an obligation to analyze spatially extended systems with multi-dimensional sym­ metry groups. However, the wealth of concrete and natural examples, which has contributed so much to the appeal and development of classical dynamics, is noticeably absent in this more general theory. A remarkable exception is provided by a class of geometric actions of (discrete subgroups of) semi-simple Lie groups, which have led to the discovery of one of the most striking new phenomena in multi-dimensional ergodic theory: under suitable circumstances orbit equivalence of such actions implies not only measurable conjugacy, but the conjugating map itself has to be extremely well behaved. Some of these rigidity properties are inherited by certain abelian subgroups of these groups, but the very special nature of the actions involved does not allow any general conjectures about actions of multi-dimensional abelian groups. Beyond commuting group rotations, commuting toral automorphisms and certain other algebraic examples (cf. [39]) it is quite difficult to find non-trivial smooth Zd-actions on finite-dimensional manifolds. In addition to scarcity, these examples give rise to actions with zero entropy, since smooth Zd-actions with positive entropy cannot exist on finite-dimensional, connected manifolds. Cellular automata (i. e.