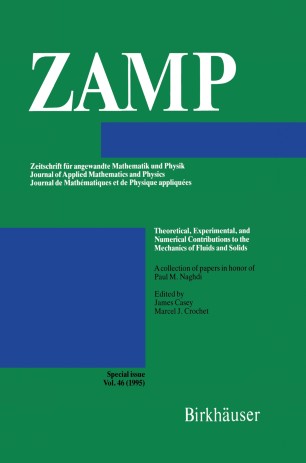 Theoretical, Experimental, and Numerical Contributions to the Mechanics of Fluids and Solids

A collection of papers in honor of Paul M. Naghdi

This special issue of ZAMP is published to honor Paul M. Naghdi for his contributions to mechanics over the last forty years and more. It is offered in celebration of his long, productive career in continuum mechan­ ics; a career which has been marked by a passion for the intrinsic beauty of the subject, an uncompromising adherence to academic standards, and an untiring devotion to our profession. Originally, this issue was planned in celebration of Naghdi's 70th birthday, which occurred on 29 March 1994. But, as the papers were being prepared for the press, it became evident that the illness from which Professor Naghdi had been suffering during recent months was extremely serious. On 26 May 1994, a reception took place in the Department of Mechanical Engineering at Berkeley, at which Naghdi received The Berkeley Citation (which is given in lieu of an honorary degree) and where he was also presented with the Table of Contents of the present collection. Subse­ quently, he had the opportunity to read the papers in manuscript form. He was very touched that his colleagues had chosen to honor him with their fine contributions. The knowledge that he was held in such high esteem by his fellow scientists brought a special pleasure and consolation to him in his last weeks. On Saturday evening, 9 July 1994, Paul Naghdi succumbed to the lung cancer which he had so courageously endured.