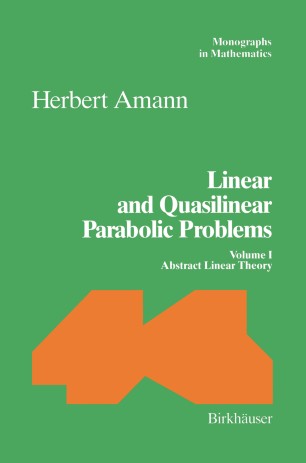 Part of the Monographs in Mathematics book series (MMA, volume 89)

In this treatise we present the semigroup approach to quasilinear evolution equa­ of parabolic type that has been developed over the last ten years, approxi­ tions mately. It emphasizes the dynamic viewpoint and is sufficiently general and flexible to encompass a great variety of concrete systems of partial differential equations occurring in science, some of those being of rather 'nonstandard' type. In partic­ ular, to date it is the only general method that applies to noncoercive systems. Although we are interested in nonlinear problems, our method is based on the theory of linear holomorphic semigroups. This distinguishes it from the theory of nonlinear contraction semigroups whose basis is a nonlinear version of the Hille­ Yosida theorem: the Crandall-Liggett theorem. The latter theory is well-known and well-documented in the literature. Even though it is a powerful technique having found many applications, it is limited in its scope by the fact that, in concrete applications, it is closely tied to the maximum principle. Thus the theory of nonlinear contraction semigroups does not apply to systems, in general, since they do not allow for a maximum principle. For these reasons we do not include that theory.