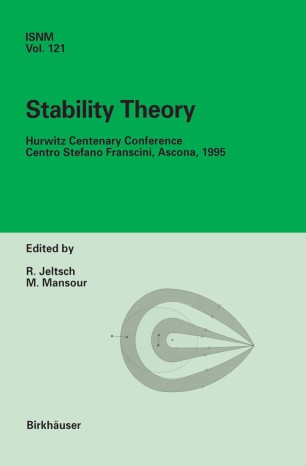 This book contains the historical development of the seminal paper of Adolf Hurwitz, professor in mathematics at ETH (1892~1919), and its impact on other fields. The major emphasis, however, is on modern results in stability theory and its application in the theory of control and numerics. In particular, stability of the following problems is treated: linear, nonlinear and time-dependent systems, discretizations of ordinary and partial differential equations, systems with time delay on multidimensional systems. In addition robust stability, pole placement and problems related to the stability radius are treated. The book is an outgrowth of the international conference "Centennial Hurwitz on Stability Theory" which was held to honor Adolf Hurwitz, whose arti­ cle on the location of roots of a polynomial was published one hundred years ago. The conference took place at the Centro Stefano Franscini, Monte Verita, Ascona, Switzerland, on May 21~26, 1995. This book contains a collection of the papers and open problem:; discussed all that occasion. Leading researchers from allover the world working on stability theory and its application were invited to present their recent results. In one paper the historic development initiated by Hurwitz's article was discussed.