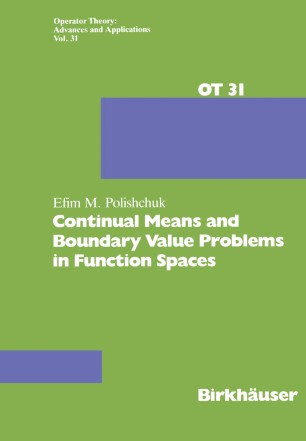 The fates of important mathematical ideas are varied. Sometimes they are instantly appreciated by the specialists and constitute the foundation of the development of theories or methods. It also happens, however, that even ideas uttered by distinguished mathematicians are surrounded with respectful indifference for a long time, and every effort of inter­ preters and successors has to be made in order to gain for them the merit deserved. It is the second case that is encountered in the present book, the author of which, the Leningrad mathematician E.M. Polishchuk, reconstructs and develops one of the dir.ctions in functional analysis that originated from Hadamard and Gateaux and was newly thought over and taken as the basis of a prospective theory by Paul Levy. Paul Levy, Member of the French Academy of Sciences, whose centenary of his birthday was celebrated in 1986, was one of the most original mathe­ matiCians of the second half of the 20th century. He could not complain about a lack of attention to his ideas and results. Together with A.N. Kolmogorov, A.Ya. Khinchin and William Feller, he is indeed one of the acknowledged founders of the theory of random processes. In the proba­ bility theory and, to a lesser degree, in functional analysis his work is well-known for its conceptualization and scope of the problems posed.