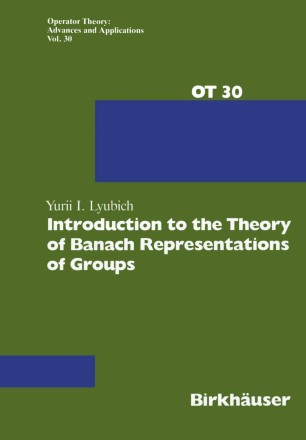 Introduction to the Theory of Banach Representations of Groups

The theory of group representations plays an important roie in modern mathematics and its applica~ions to natural sciences. In the compulsory university curriculum it is included as a branch of algebra, dealing with representations of finite groups (see, for example, the textbook of A. I. Kostrikin [25]). The representation theory for compact, locally compact Abelian, and Lie groups is co­ vered in graduate courses, concentrated around functional analysis. The author of the present boo~ has lectured for many years on functional analysis at Khar'kov University. He subsequently con­ tinued these lectures in the form of a graduate course on the theory of group representations, in which special attention was devoted to a retrospective exposition of operator theory and harmo­ nic analysis of functions from the standpoint of representation theory. In this approach it was natural to consider not only uni­ tary, but also Banach representations, and not only representations of groups, but also of semigroups.