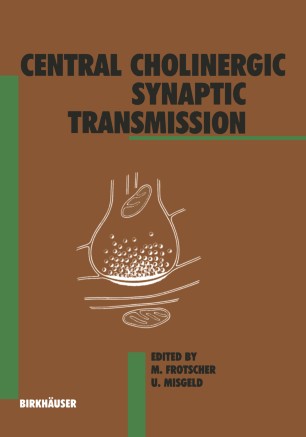 Our knowledge of cholinergic synaptic transmission in the peripheral nervous system (PNS) has expanded enormously since the early 1930's, at which time O. Loewi discovered chemical neurotransmission through acetylcholine (ACh) and the pharmacological actions of ACh were described by H. Dale and his colleagues. Description of ACh's actions and receptors in various parts of the brain was followed by a detailed analysis of ACh's synthesis, release mechanism, removal from the synaptic cleft, modes of agonist-receptor interactions, properties of regulated conductances and of the pre-and postsynaptic modulation of cholinergic synapses. Our knowledge has been increasingly consolidat­ ing, leading us to the recent clarification of the structure of the periph­ eral nicotinic receptor-ion channel and its functional properties. It is appropriate to maintain the claim that the fundamentals of our under­ standing of synaptic transmission come from studies on cholinergic synapses in the PNS. Contrastingly, views held on the role of cholinergic synapses in the mammalian central nervous system (CNS) are extremely controversial, although it has been clear for some time that ACh is present in the brain. Illustrating this, no unanimous view is held on the role of nicotinic receptors in the CNS. There is one notable exception to this confusion: Studies begun by J. C. Eccles and associates in the 1960's and completed by D. R. Curtis and R. W.