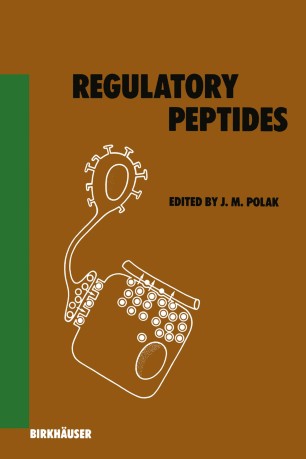 J. M. Polak and S. R. Bloom For some time Experientia has published, as a unique feature, interdis­ ciplinary multi-author reviews, giving a comprehensive overview of sub­ jects regarded as 'growing edges' of science. The enthusiasm shown by the readers was contagious and thus it was felt necessary to compile a special volume dealing with the novel aspects of regulatory peptides. This book covers some of the growing areas in regulatory peptide research and, although it is based on the original volume of Experientia, it is expanded and updated. The topic of 'regulatory peptides' is relatively young and has grown at an unprecedented pace, from the embryonic conception of 'gut hor­ mones' or 'brain neuropeptides' some 15 years ago to the realisation that these active pep tides are found, almost without exception, in every part of l8 23 the body in all vertebrate and many invertebrate species • Why the term 'regulatory peptides'? It represents a convenient label encompassing both the active peptides present in nerves, which are re­ leased as (putative) neurotransmitters, and those in endocrine cells, which act locally or at a distance as circulating hormones, these being the l8 main components of the so-called diffuse neuroendocrine or APUD 17 system • Morphological studies support this physiological viewpoint.