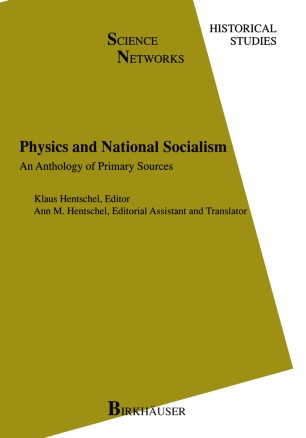 An Anthology of Primary Sources

1 Aim and General Description of the Anthology The purpose of this anthology is to introduce the English speaking public to the wide spectrum of texts authored predominently by physicists portraying the ac­ tual and perceived role of physics in the Nazi state. Up to now no broad and well­ balanced documentation of German physics during this time has been available in English, despite the significant role physics has played both politically (e. g. , in weaponry planning) and ideologically (e. g. , in the controversy over the value of theoretical ('Jewish') vs. experimental ('Aryan') physics), and even though prominent figures like the scientist-philosopher and emigre Albert Einstein and the controversial nuclear physicist Werner Heisenberg have become household names. This anthology will attempt to bridge this gap by presenting contempo­ rary documents and eye-witness accounts by the physicists themselves. Authors were chosen to represent the various political opinions and specialties within the physics community, omitting some of the more readily accessible texts by leading physicists (e. g. , Einstein, Heisenberg, Lenard) in favor of those by less well-known but nonetheless important figures (e. g. , Finkelnburg, Max Wien, Ramsauer). In this way we hope not only to circumvent the constricted 'Great Men' approach to history but also to offer a broader picture of the activities and conflicts within the field and the effects of the political forces exerted upon them.