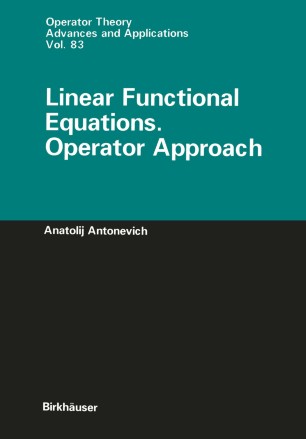 In this book we shall study linear functional equations of the form m bu(x) == Lak(X)U(Qk(X)) = f(x), (1) k=l where U is an unknown function from a given space F(X) of functions on a set X, Qk: X -+ X are given mappings, ak and f are given functions. Our approach is based on the investigation of the operators given by the left-hand side of equa­ tion (1). In what follows such operators will be called functional operators. We will pay special attention to the spectral properties of functional operators, first of all, to invertibility and the Noether property. Since the set X, the space F(X), the mappings Qk and the coefficients ak are arbitrary, the class of operators of the form (1) is very rich and some of its individ­ ual representatives are related with problems arising in various areas of mathemat­ ics and its applications. In addition to the classical theory of functional equations, among such areas one can indicate the theory of functional-differential equations with deviating argument, the theory of nonlocal problems for partial differential equations, the theory of boundary value problems for the equation of a vibrating string and equations of mixed type, a number of problems of the general theory of operator algebras and the theory of dynamical systems, the spectral theory of au­ tomorphisms of Banach algebras, and other problems.