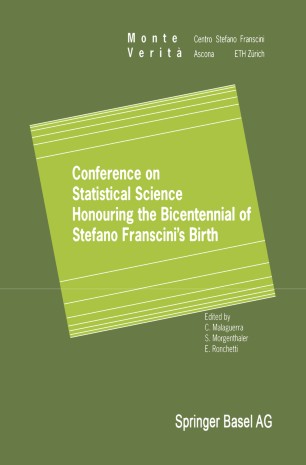 The Conference on "Statistical Science", held in Monte Verita (Switzerland) on 18/20 November 1996, was intended to honour the memory of Stefano Franscini at the occasion of the bicentennial of his birth (1796-1996). It was jointly organized by the Swiss Federal Institute of Technology in Lausanne, the Swiss Federal Statistical Office and the University of Geneva. These proceedings gather a selected collection of contributions presented by statisticians from universities, research institutes and national statistical services of Europe, North America and Asia. Part I focuses on a historical appreciation of Stefano Franscini's life and work. Authors develop a deep analysis of the historical context, the political action, the scientific achievement and the intellectual legacy of the founding father of Swiss official statistics. The reader thus has an opportunity to appreciate the various facets of this exceptional man who not only drew the first comprehensive statistical portrait of Switzerland but also established the foundations for modem educational and political institutions. Part II groups papers on the relationship between statistical science and official statistics. Authors analyse the historical background, current context and new perspectives of co-operation between scientific research and official statistical services. They show how the relationship between both partners has evolved over the past decades, stressing certain prerequisites and opportunities for effective of rigourous interaction between academia's scientific activity and the production statistical information.