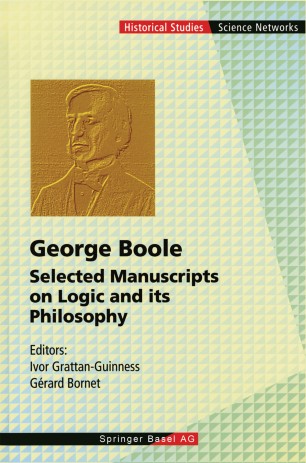 Selected Manuscripts on Logic and its Philosophy

George Boole (1815-1864) is well known to mathematicians for his research and textbooks on the calculus, but his name has spread world-wide for his innovations in symbolic logic and the development and applications made since his day. The utility of "Boolean algebra" in computing has greatly increased curiosity in the nature and extent of his achievements. His work is most accessible in his two books on logic, "A mathematical analysis of logic" (1947) and "An investigation of the laws of thought" (1954). But at various times he wrote manuscript essays, especially after the publication of the second book; several were intended for a non-technical work, "The Philosophy of logic", which he was not able to complete. This volume contains an edited selection which not only relates them to Boole's publications and the historical context of his time, but also describes their strange history of family, followers and scholars have treid to confect an edition. The book will appeal to logicians, mathematicians and philosophers, and those interested in the histories of the corresponding subjects; and also students of the early Victorian Britain in which they were written.