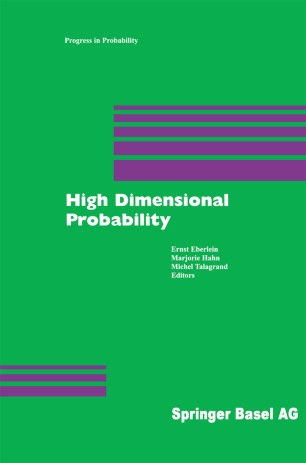 Part of the Progress in Probability book series (PRPR, volume 43)

What is high dimensional probability? Under this broad name we collect topics with a common philosophy, where the idea of high dimension plays a key role, either in the problem or in the methods by which it is approached. Let us give a specific example that can be immediately understood, that of Gaussian processes. Roughly speaking, before 1970, the Gaussian processes that were studied were indexed by a subset of Euclidean space, mostly with dimension at most three. Assuming some regularity on the covariance, one tried to take advantage of the structure of the index set. Around 1970 it was understood, in particular by Dudley, Feldman, Gross, and Segal that a more abstract and intrinsic point of view was much more fruitful. The index set was no longer considered as a subset of Euclidean space, but simply as a metric space with the metric canonically induced by the process. This shift in perspective subsequently lead to a considerable clarification of many aspects of Gaussian process theory, and also to its applications in other settings.