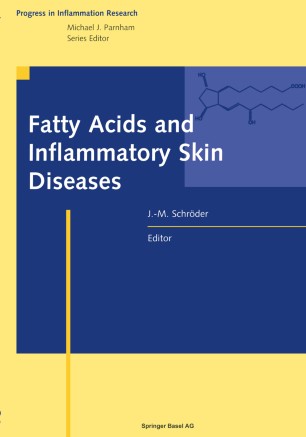 Fatty acids play an important role in the barrier function of skin and represent a major source of proinflammatory mediators such as prostaglandins, leukotrienes and other lipids in inflammatory skin disorders. This book combines the two major functions of fatty acids in skin biology. In the first part the biosynthesis of fatty acids in skin with its role in barrier function as well as the role of dietary fatty acids on skin cell function and in the treatment of inflammatory skin diseases is presented. The second part deals with skin as a source of proinflammatory eicosanoids, especially with the keratinocyte as a major cellular source. Metabolism of eicosanoids in skin, its role in psoriasis and atopic dermatitis as well as pharmacological inhibition of eicosanoid biosynthesis is reviewed. The book finishes with a chapter describing the methods used for quantification of fatty acids and derivatives in skin inflammation. Anyone interested in skin physiology would benefit from the overviews about the two sites of fatty acids' function in skin integrity and in skin inflammation.