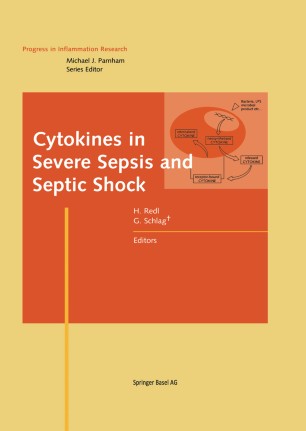 t Heinz Red! and Gunther Sch!ag Ludwig Boltzmann Institute for Experimental and Clinical Traumatology, Vienna, Austria The word "sepsis" derives from the Greek meaning decay or rottenness. Tradition­ ally this term has been used to describe the process of infection accompanied by the host's systemic inflammatory response. Based on that understanding, previous clin­ ical studies have been designed to include only patients with positive blood cultures [1, 2]. However, the frequent occurrence of a septic response without the demon­ stration of microorganisms in the circulation has led to a new definition and under­ standing of sepsis, mainly as the systemic response of the host to an often unde­ tectable microbiological or non-microbiological process [3]. The general consensus is that cytokines are central to the inflammatory response, particularly in sepsis. It is now known that not only Gram-negative but also Gram­ positive, viral, and fungal infections initiate the complex cascades of cytokine release. Probably the most important aspect of bacterial action is the release of toxic bacterial products. In particular endotoxin from Gram-negative bacteria (see chap­ ter by Schade) and super antigens (see chapter by Neumann and Holzmann), as well as pore-forming toxins [4] from Gram-positive bacteria, induce cytokine formation. The importance of this cytokine release is evident from both diagnostic and thera­ peutic (mostly experimental) studies, and the action of cytokines may be the key to our understanding of the pathophysiology of the sepsis syndrome.