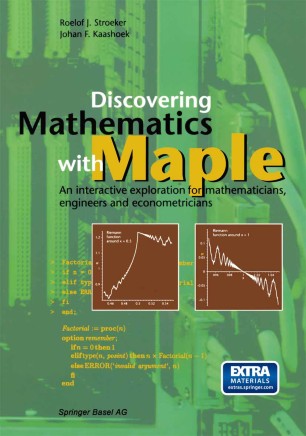 An interactive exploration for mathematicians, engineers and econometricians

his book grew out of the wish to let students of econometrics get acquainted T with the powerful techniques of computer algebra at an early stage in their curriculum. As no textbook available at the time met our requirements as to content and presentation, we had no other choice than to write our own course material. The try-out on a group of 80 first year students was not without success, and after adding some necessary modifications, the same material was presented to a new group of students of similar size the year after. Some more adjustments were made, and the final result now lies before you. Working with computer algebra packages like Derive, Mathematica, and Maple over many years convinced us of the favourable prospects of computer algebra as a means of improving the student's understanding of the difficult concepts on which mathematical techniques are often based. Moreover, advanced mathematical ed­ ucation, be it for mathematics itself or for mathematical statistics, operations research and other branches of applied mathematics, can greatly profit from the large amount of non-trivial mathematical knowledge that is stored in a computer algebra system. Admittedly, the fact remains that many a tough mathematical problem, such as solving a complicated non-linear system or obtaining a finite ex­ pression for a multiple parameter integral, can not easily be handled by computer algebra either, if at all.

"This book distinguishes itself... [the] reader learns how to use MAPLE® by posing problems of strictly mathematical nature, and—as a result—the reader gets insight into the practical and theoretical framework mathematics... Highly recommended."