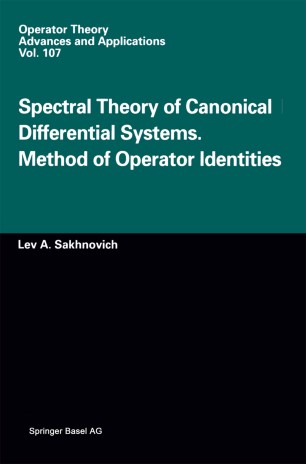 The spectral theory of ordinary differential operators L and of the equations (0.1) Ly= AY connected with such operators plays an important role in a number of problems both in physics and in mathematics. Let us give some examples of differential operators and equations, the spectral theory of which is well developed. Example 1. The Sturm-Liouville operator has the form (see [6]) 2 d y (0.2) Ly = - dx + u(x)y = Ay. 2 In quantum mechanics the Sturm-Liouville operator L is known as the one-dimen­ sional Schrodinger operator. The behaviour of a quantum particle is described in terms of spectral characteristics of the operator L. Example 2. The vibrations of a nonhomogeneous string are described by the equa­ tion (see [59]) p(x) ~ o. (0.3) The first results connected with equation (0.3) were obtained by D. Bernoulli and L. Euler. The investigation of this equation and of its various generalizations continues to be a very active field (see, e.g., [18], [19]). The spectral theory of the equation (0.3) has also found important applications in probability theory [20]. Example 3. Dirac-type systems of the form (0.4) } where a(x) = a(x), b(x) = b(x), are also well studied. Among the works devoted to the spectral theory of the system (0.4) the well-known article of M. G. KreIn [48] deserves special mention.