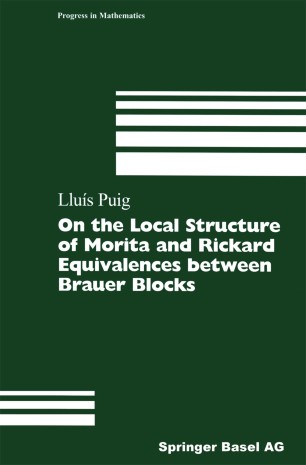 Part of the Progress in Mathematics book series (PM, volume 178)

Brauer had already introduced the defect of a block and opened the way towards a classification by solving all the problems in defects zero and one, and by providing some evidence for the finiteness of the set of blocks with a given defect. In 1959 he discovered the defect group, and in 1964 Dade determined the blocks with cyclic defect groups.
In 1978 Alperin and Broué discovered the Brauer category, and Broué and the author determined the blocks having a nilpotent Brauer category. In 1979, the author discovered the source algebra which determines all the other current invariants, representing faithfully the block – and found its structure in the nilpotent blocks. Recently, the discovery by Rickard that all blocks with the same cyclic defect group and the same Brauer category have the same homotopic category focussed great interest on the new, loose relationship between blocks called Rickard equivalence.
This book describes the source algebra of a block from the source algebra of a Rickard equivalent block and the source of the Rickard equivalence.