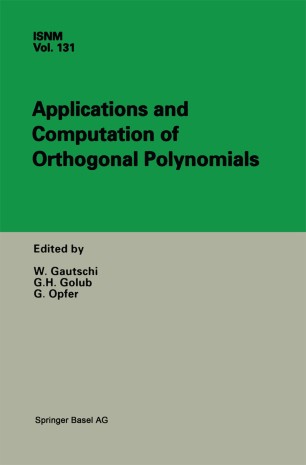 Applications and Computation of Orthogonal Polynomials

The workshop on Applications and Computation of Orthogonal Polynomials took place March 22-28, 1998 at the Oberwolfach Mathematical Research Institute. It was the first workshop on this topic ever held at Oberwolfach. There were 46 participants from 13 countries, more than half coming from Germany and the United States, and a substantial number from Italy. A total of 23 plenary lectures were presented and 4 short informal talks. Open problems were discussed during an evening session. This volume contains refereed versions of 18 papers presented at, or submitted to, the conference. The theory of orthogonal polynomials, as a branch of classical analysis, is well established. But orthogonal polynomials play also an important role in many areas of scientific computing, such as least squares fitting, numerical integration, and solving linear algebraic systems. Though the basic tenets have their roots in 19th­ century mathematics, the use of modern computers has required the development and study of new algorithms that are accurate and robust. The computational methods and applications represented in this volume, of necessity, are incomplete, yet sufficiently varied to convey an impression of current activities in this area.