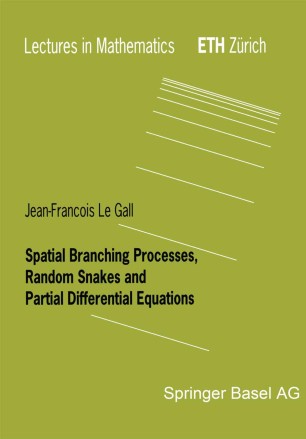 In these lectures, we give an account of certain recent developments of the theory of spatial branching processes. These developments lead to several fas­ cinating probabilistic objects, which combine spatial motion with a continuous branching phenomenon and are closely related to certain semilinear partial dif­ ferential equations. Our first objective is to give a short self-contained presentation of the measure­ valued branching processes called superprocesses, which have been studied extensively in the last twelve years. We then want to specialize to the important class of superprocesses with quadratic branching mechanism and to explain how a concrete and powerful representation of these processes can be given in terms of the path-valued process called the Brownian snake. To understand this representation as well as to apply it, one needs to derive some remarkable properties of branching trees embedded in linear Brownian motion, which are of independent interest. A nice application of these developments is a simple construction of the random measure called ISE, which was proposed by Aldous as a tree-based model for random distribution of mass and seems to play an important role in asymptotics of certain models of statistical mechanics. We use the Brownian snake approach to investigate connections between super­ processes and partial differential equations. These connections are remarkable in the sense that almost every important probabilistic question corresponds to a significant analytic problem.

"Concise and essentially self-contained… A very accessible text…written by a leading expert of the field… It provides a clear and precise presentation of several important aspects of the theory…developed over the recent years. There is no doubt that such a monograph will be used both by beginners to learn the theory and by experts as a reference text."