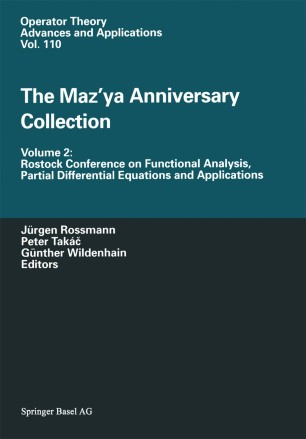 During the week of August 31 - September 4, 1998, a conference in honour of Vladimir Maz'ya was held in Rostock as a satellite meeting of the World Congress of Mathematicians. It was sponsored by the German Research Founda­ tion (Deutsche Forschungsgemeinschaft) and the Ministry of Education and Cul­ tural Affairs of the land Mecklenburg-Vorpommern. During his forty year career Maz'ya contributed to so many areas of mathematical analysis that such a broad topic of the conference as "Functional Analysis, Partial Differential Equations and Applications" sounds quite nat~al. The conference was organized by the Depart­ ment of Mathematics of the University of Rostock and the Weierstrass Institute of Applied Analysis and Stochastics in Berlin on the occasion of his 60th birth­ day. For many years Maz'ya was connected with mathematicians from Berlin and Rostock through his work in potential theory, in differential and pseudodifferen­ tial equations and in approximation theory. In 1990 he was awarded an honorary doctorate by the University of Rostock. Shortly before the meeting, one of its organizers, an outstanding mathematician and Maz'ya's dear friend, Siegfried Pr6Bdorf died. This was a heavy loss for the and for the conference in particular. During the German mathematical community meeting the rector of the University of Rostock, Prof. Wildenhain, the director of the Weierstrass Institute, Prof. Sprekels, and Prof. Maz'ya remembered S. Pr6Bdorf very warmly. The conference was attended by 109 mathematicians from 21 countries, and the program included 24 invited lectures and 63 short communications.